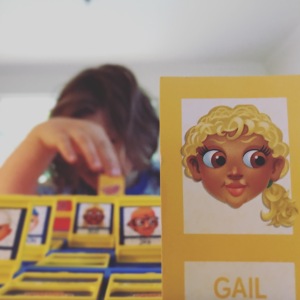 This one is just for fun, because kids with CVI like to have fun. We can play a game and approach it from the perspective of cortical visual impairment (CVI). A good friend recently gave Jasper a game called “Guess Who?” My worry was that it was about recognizing facial expressions. Turns out it is more about recognizing visual details than expressions. And turns out that my son adores this game.

The basic idea is you have a board full of people (faces) tabs, and both players pick a card with a picture of one of those people. You then ask each other questions to “guess who” is on the other player’s card. With 25 cards of faces in front of you, it can be complex but as you ask questions, and knock down the tabs, the complexity of array (Roman) does not last long.

Another bonus is that the cards have so much detail to draw upon. My son is drawn to a person’s ears. Although he can now make eye contact, but not necessarily maintain it (Roman), his focus on ears may be his default. On a few cards, only one ear is visible. Using this motivating detail, my question was, Does your mystery person have two ears? The focus on ears made it fun for him and motivated him to look.

While the images are rich with detail, they do of course have facial expressions. Exploring this during a recent game, my question was, Does your mystery person look happy? When the game ended, my son showed me his mystery person, who he interpreted as happy. While the mouth is somewhat upturned, the overall expression is not one of happiness.

Even well into Phase III CVI, it can be easier to discriminate details like hair or earrings or dress than it is to decode a facial expression. A face is hard, even when it appears as a static illustration on a card. With “Guess Who,” my son gets to play and practice.

3 thoughts on ““Guess Who?” game in Phase III CVI”