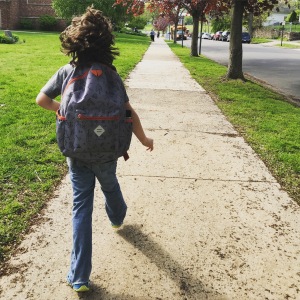 The last day of school, at last. The last day of a long year, a transition year. New school, new teachers, new students, new environment, new team mostly new to the disability of cortical visual impairment (CVI). The last weeks were about pushing through, the final sprint. New assessments and therapy appointments were put on hold. Sensory outings and activities with animals and swimming were instead written in. Today is the last Friday of second grade. Today is the last art class. Today is the last pizza day. The countdown began.

You could feel the buzz at after school pick up. All the kids were so done, so ready for a break, so ready for some fresh air. All year long, making myself visible at pick up. Do not stand in the long line of other parents all the way across the room. Stand in the front of room. Wear a solid bright color. Wear a hat. Wear a ponytail, something, anything that is recognizable for him. That head tilt to the left, looking, searching. Each time, is it really mommy. By the look on his face and the movement in his body, anybody can see he is more than ready to go.

All year long we talked about friends. Making friends, recognizing friends, being a friend. Most mornings in the hallway at drop off, he spotted friends, saying Hi to them as they passed him on their way to class, it was impressive. Bumping into friends around town, or at the neighborhood trick or trick, or at swimming. Always the other kid recognizes the child with CVI first, never the other way around.

We said a hasty goodbye and thank you for all your help to his paraprofessional, then joined the throng of kids and parents and caregivers making its way outside.

But this time he did spot a friend.

A few steps behind us was a girl about his same height, who had long blond hair and was accompanied by her grown up. Every girl at school seemed to have that same long hair. Jasper went confidently right up to her and said ‘Bye! Then repeated his farewell, Bye, Aiofe! The girl just looked at him blankly. Are you…? I started to say but did not quite know how. Are you in Jasper’s class? Are you Aiofe? Are you his friend? In the moment it was hard to know how to put it into words. So much of the time, the social faux pas feels more like mine, than his.

She looks just like Aiofe, doesn’t she?? was all the reassurance I could think of.

His disappointment was brief. He stayed quiet as we headed for the open doors where sunshine and summer break awaited.