To kick off CVI Literacy Awareness in April, a post by Ellen Mazel on Building Literacy Around What Children Care About for students with cortical visual impairment (CVI), was a good reminder of a similar idea that helped my son.

From early on, literacy was a priority, even in those difficult first years when it was unclear what my son’s future might be like. Reading books together became a routine that continues to this day. Wanting to make a book that would be meaningful to him was important. With cortical visual impairment, that meant considering the CVI characteristic of novelty (Roman-Lantzy). Novelty means that new objects are hard. It is easier for our kids to look at familiar objects and toys (Roman-Lantzy).

So the focus was on familiar objects from Jasper’s daily routine. At the time, Jasper was in birth to three services and in Phase II CVI (Roman-Lantzy). His development was delayed and that included speech communication delays, and a handful of words. We talked a lot about going to “school,” which he loved. For a long time, most of his books were carefully chosen board books. Since he loved “school,” a book called My School /Mi Escuela by Rebecca Emberley, was a good fit for him.

The images in this series of books are on the abstract side, but with white backgrounds and low complexity (Roman-Lantzy). The theme of “school” was motivating, in addition to a few familiar objects. The objects from Jasper’s daily routine were photographed head on and images printed on matte paper. There were only a few familiar objects added on three pages throughout the book, not on every page of the book. Objects were matched with appropriate themes. So his giraffe backpack (or “g-raff” as we say to this day per Justin Roberts) was added to a page with cubbies. Play dough was a preferred activity then – “do dough!” was a regular morning request. The yellow and red container (preferred color yellow, Roman-Lantzy) stood out on the page with art materials of one solid color. 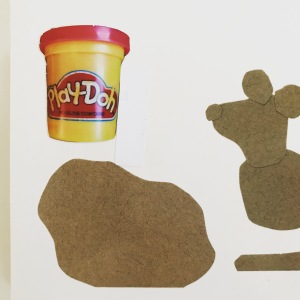 On pages with competing complexity, additional objects or words were covered up with plain white labels.

Looking through the book, we talked about each object and named its salient features (“a table has four legs and a flat top”). All the while, looking for him to recognize the familiar object. The intention was to get him hooked with something meaningful, and to motivate him to want to look at books.