“For children with CVI, words can be more stable than pictures.” These were the words of Christine Roman-Lantzy that this CVI mom had heard repeatedly, it seemed, this past year. But it was at our ophthalmology appointment that the words played out right before my eyes.

To say that cortical visual impairment is a complex diagnosis is an understatement. Along with CVI, we have amblyopia, astigmatism, hemianopsia, myopia, nystagmus, strabismus, and most recently, anisometropia. While some of these can be considered “ocular” impairments, they are intrinsically connected to his CVI, or at least to the damage that resulted in his cortical visual impairment. Anisometropia, by its simplest definition, is a difference in acuity between the two eyes. When it comes to my son’s vision, even acuity is complex. The problem became apparent when Jasper started covering his left eye whenever he looked at…anything. The teacher response was to tell him to stop doing this – but our kids’ behavior has meaning and purpose. So instead of covering that left eye, Jasper began shutting it whenever he looked at…anything. Because the left eye is “weaker” – the damage to his occipital lobes is greater on the right than the left – he had come to rely on the right eye, creating an imbalance in his acuity. Use it or lose it.

Ever since the diagnosis of anisometropia two years ago, we follow up with the ophthalmologist every four months. Well aware of the complexity of my son’s vision, that acuity test hits hard every time. Lea Symbols are commonly used to test the distance acuity of children beginning at age 2 1/2. The four symbols are a circle, apple, square, house. For a child with CVI, it seems fair to review the symbol shapes prior to the test. Circle, square…is that another square? No, it is similar to square on the bottom but is pointy on top, with edges that point down, like the roof of a house, it must be a house. And is that another circle? It is circular but curves in at the top and bottom, similar to an apple, how it curves at the top where the stem is, that must be an apple. But this is not what happens and my son, who loves going to the ophthalmologist, struggles in the exam chair from twenty  feet away to distinguish the salient features of the house and the apple (Roman). Each time, the same result. He might get one or two correct.

Except last time. Jasper is now six years old, beginning first grade. The doctor’s assistant asks, Does he know the alphabet? Yes – yes!! And instead of Lea Symbols, letters appear on the screen across the dimly lit room. Holding my breath, Jasper reads off the letters. Still imperfect, but this time he is able to identify almost all of them. Instead of only one or two correct, he misses two or three. It was by far the best he has ever performed on a distance acuity test.

The thing is, pictures will be different every time. Not all houses have a triangle on top. In our town, Seattle, all the new housing construction is large and boxy, no quaint triangles. You would be hard pressed to even identify the garage. A house might look different each time. A picture of a dog will look different each time, it could be a photograph of a dog or an illustration of a dog or a painting of a dog. It is a different dog each time. While there will be some variability depending on the font, the word dog looks the same each time. Dog is a short word that starts with a tall letter and ends with a letter g that dangles down. Letters are reliable. More reliable, more recognizable, and less visual brain energy required to figure it all out.

“For children with CVI, words can be more stable than pictures.” Her words came back to me instantly. Still stunned, I jotted the sentence down as the doctor arrived to finish the exam. Comparing Jasper’s struggle with abstract pictures versus plain old letters, forces a kind of acceptance. As the parent of a child who has CVI, you see that struggle every day. Reading those letters feels less like a struggle and more like an accomplishment, and we will take that and run with it. 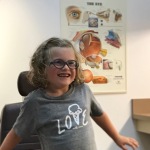 2 thoughts on ““Words can be more stable than pictures””